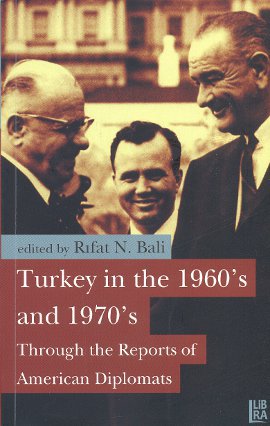 Rıfat N. Bali
0,0 / 5 0 kişi · 0 yorum · 220 okunma · 0 tavsiye
Okuyacaklarıma Ekle
İnceleme Ekle Alıntı Ekle
Kitap Künye
Yayınevi:
Libra Yayınları
ISBN:
786054326198
Sayfa:
284 s.
Yıl:
2010
This work is comprised mainly of reports prepared by American diplomats stationed in Turkey during the 1960s and 1970s, decades in which the country underwent a series of profound and wrenching political crises. The reports contained in this work give a unique perspective on the state of affairs in Turkey during that period, as viewed through the eyes of American diplomats. Student movements, an ultimatum to the government by the Turkish General Staff on March 12, 1971, Kurdish issues and the status of the country's religious and ethnic minorities are just a few of the subjects covered.
(Arka Kapak)