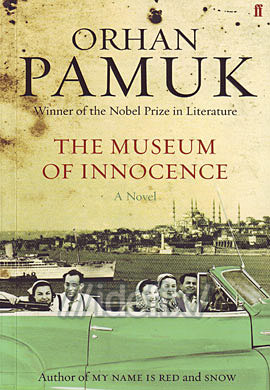 The Museum Of Innocence

And so begins the new novel from universally acclaimed author of Snow and My Name is Red, his first since winning the Nobel Prize.

It is a perfect spring in 1975, Istanbul. Kemal, heir to the one of the town's wealthiest families, is about to become engaged to Sibel, from another aristocratic family, when he encounters Füsun, a beautiful shopgirl, and a distant relation.

As they break the taboo of virginity, a rift opens between Kemal and his lovingly described world of the westernized families of Istanbul with their opulent parties and clubs, society gossip, dining-room rituals, picnics, their mansions on the Bosphorus infused with the melancholy of decay.

For nine years Kemal will find excuses to visit other Istanbul, a house in the impoverished backstreets that Füsun shares with her parents, enjoying the consolations of middle-class life at a dinner table in front of the television. His love for distant relative will take him to the seedy film circles of Istanbul, cheap bars, sad hotels, a society of small men with big dreams and bitter failures.

It will make Kemal a compulsive collector of objects that chronicle his love story and his obsessive heart's reactions: his anger and impatience, his remorse and humiliation, his miscalculated hopes of recovery, and his daydreams that transform his Istanbul into a city of signs and spectres of his beloved with whom he can only change meaning-laden glances, stolen kisses in cars, movie houses and park shadows.

All that will remain to him, certainly and eternally, is the museum he creates, a map of a society's rituals and mores, and of one man's broken heart.

A stirring exploration of the nature of romantic attachment, and of the mysterious allure of collecting, THE MUSEUM OF INNOCENCE plumbs the depths of an Istanbul half western and half traditional - its rituals, its morality, its vast cultural history.