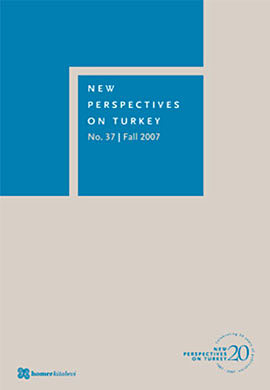 New Perspectives on Turkey No: 37

Kolektif : Dergi | idefi
0,0 / 5 0 kişi · 0 yorum · 184 okunma · 0 tavsiye
İnceleme Ekle Alıntı Ekle
Kitap Künye
Yayınevi:
New Perspectives
ISBN:
771305329004
Sayfa:
240 s.
Yıl:
2007
The New Perspectives on Turkey (NPT) is a refereed, scholarly journal published biannually by Homerbooks. The aim of the journal is to provide a medium and an intellectual platform for debates and new scholarly ideas relating to the history, politics, society, economy and culture of Turkey and the Ottoman Empire. In addition to research directly concerned with Turkey and the Ottoman Empire, comparative perspectives and theoretical contributions relevant to such research are also actively solicited. The variety of material in the past issues - ranging from Ottoman history to contemporary politics, from general theoretical concerns to interventions in specific debates - reflects the diversity of the journal's area of interests.

Retrieving the Dignity of a Cosmopolitan City: Contested Perspectives on Rights, Culture and Ethnicity in Mardin -Zerrin Özlem Biner-

The Politics of Urban Regeneration: The Case of the Fener and Balat Initiative
-Dikmen Bezmez-

Labor Transformation Through the Prism of the Household: Evidence From the Turkish Tourism Industry
-Aslıhan Aykaç-

Markets and Fields: An Ethnography of Cotton Production and Exchange in a Turkish Village
-Koray Çalışkan-

Review Article: A Call for an Environmental History of the Ottoman Empire and Turkey: Reflections on the Fourth ESEH Conference.
-Selçuk Dursun-