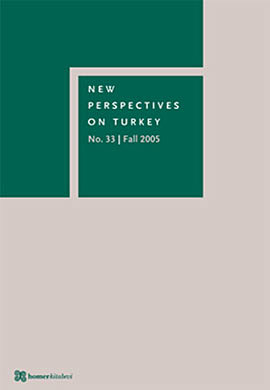 New Perspectives on Turkey No: 33

Kolektif : Dergi | idefi
0,0 / 5 0 kişi · 0 yorum · 213 okunma · 0 tavsiye
Okuyacaklarıma Ekle
İnceleme Ekle Alıntı Ekle
Kitap Künye
Yayınevi:
New Perspectives
ISBN:
771305329004
Sayfa:
164 s.
Yıl:
2005
The New Perspectives on Turkey (NPT) is a refereed, scholarly journal published biannually by Homerbooks. The aim of the journal is to provide a medium and an intellectual platform for debates and new scholarly ideas relating to the history, politics, society, economy and culture of Turkey and the Ottoman Empire. In addition to research directly concerned with Turkey and the Ottoman Empire, comparative perspectives and theoretical contributions relevant to such research are also actively solicited. The variety of material in the past issues - ranging from Ottoman history to contemporary politics, from general theoretical concerns to interventions in specific debates - reflects the diversity of the journal's area of interests.

Empire of Sin: Militant Theology and Ideology in Early American Missions to the Ottoman Near East
-Cornelia A. Tsakiridou-

Presenting the Desert to the Ottomans During WWI: The Perspective of the Harb Mecmuası
-Eyal Ginio-

On Humans, Fish, and Mermaids: The Republican Taxonomy of Tastes and Arabesk
-Murat Ergin-

Democracy and the Politics of Parliamentary Immunity in Turkey -Gürcan Koçan, Simon Wigley-