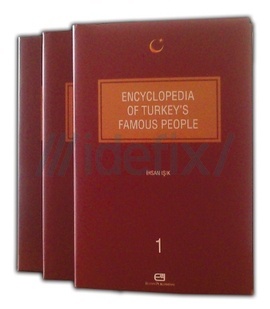 İhsan Işık
0,0 / 5 0 kişi · 0 yorum · 296 okunma · 0 tavsiye
İnceleme Ekle Alıntı Ekle
Kitap Künye
Yayınevi:
Elvan Yayınları
ISBN:
9786058745599
Sayfa:
0 s.
Yıl:
2014
İhsan Işık put his signature on 18 volumes of encyclopedias in Turkish and in English so far. In İhsan Işık's encyclopedia named "Encyclopedia of Turkey's Famous People" which is published in English in 3 volumes, around 1,500 famous people who were raised in Turkey's cultural and political hinterland are being introduced.
İhsan Işık has chosen these names among around 2,000 famous people included in the Turkish encyclopedia named "Turkiye Unluleri Ansiklopedisi" which was published 6 months ago in Turkish.

The Turkish encyclopedia was published in these 6 categories as 6 volumes; and the English encyclopedia these names are presented together in 3 volumes in alphabetical order.

In the selection of the names included in the encyclopedias a survey was conducted with the academicians and freelance writers, and among around 10,000 names the most important ones were found; comprehensive and accurate information was collected about them and their biographies were written with a flowing style.

İhsan Işık, author of the encyclopedia, explains the reason for writing these two encyclopedias as follows:

Successful examples are vital for our youth. We have to remind and prove our sons and daughters that there are other examples than the bad ones being pumped every day from the media, particularly from the television and the existence of better idols for being successful.

Our youth, which is very important in terms of the future of our country, is affected largely from the people shown to them as examples through family, environment, education system and media while preparing for life, they think that they may be successful by trying to emulate them. In this respect, for our youth to be successful and respected individuals in the society, it is one of the best works which may be done for our youth and our country is to introduce them our famous people who had country wide and worldwide successes.

Knowing that we have respected famous people in various areas and how they achieved this success will increase the self confidence of our youth at the beginning, and their motivation increasing in this respect will allow them to write their own success stories.

Based on these facts, in the volumes of "Turkey's Famous People Encyclopedia" we intend to introduce the worldwide successful scientists, literates, artists, managers and businessmen and famous women in various areas with their success stories.

Besides;
In the cultural geography where our country is located, the biggest lie spread by the West imperialism is that the leaders in all kinds of science, culture and art branches came from West throughout the world's history and that the East always had to imitate the West and that this is our destiny. With this very important lie, they intend to push us to inferiority complex and to exploit us even more, to hide those they have taken and even stolen from us, and to perform the psychological propaganda they consider necessary to exploit us.

This study reveals that we have a lot of famous politicians, scientists, intellectuals and literates, artists, men of letters grown in the Turkey's political and cultural hinterland throughout the history, that there were numerous women among them; thus it contradicts with those lies and it proves that our youth has a honorable history enough to have confidence in them.
(Tanıtım Bülteninden)