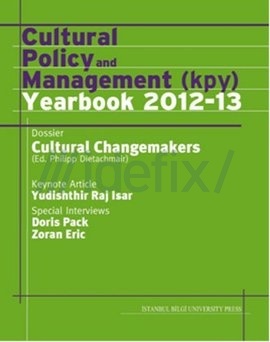 PHILIPP DIETACHMAIR
0,0 / 5 0 kişi · 0 yorum · 182 okunma · 0 tavsiye
İnceleme Ekle Alıntı Ekle
Kitap Künye
Yayınevi:
İstanbul Bilgi Üniversitesi Yayınları
ISBN:
9786053993285
Sayfa:
0 s.
Yıl:
2014
This issue of the Cultural Policies and Management Yearbook 2012-2013, published by İstanbul Bilgi University Cultural Policy and Management Research Centre (KPY), focuses on the way in which cultural operators have been instrumental in bringing about change and renewal in the cultural scene in the context of and in response to the present situation of social change and crisis. The current crisis has both economic and political dimensions. On the one hand, there is the economic slowdown caused by the financial crisis in Europe and the United States; on the other, there is the political crisis, known as the 'Arab Spring', which began in 2011 with the overthrow of the governments in Tunisia and Egypt and which continued on into Libya. Whether economic or political, these crises have affected many countries from North Africa to the United States, including Spain and Greece. Their most important effect has been the emergence of a continuing political activism in which a wide spectrum of ordinary people has taken to the streets. Civil society activism is spreading as a global phenomenon and cities are assuming new roles as stages of democratic visibility. What began in 2011 in Zuccotti Park on Wall Street in New York and spread as the 'Occupy' movement to many cities all over the world, including Istanbul with the Gezi Park demonstrations in May and June this year, is a global wave of protest which necessitates a fresh look at the issue of political participation. The role and function of the arts are also in question at these times of social change and dynamism.

In this fourth issue of the KPY Yearbook we wanted to look into how this on-going crisis and social turmoil is being addressed by cultural operators, and how these dynamics are impacting on the fields of culture and art. We will no doubt be returning to these questions at length in future issues of the Yearbook.

As usual, the Yearbook begins with a keynote article. This year it is based on a talk given at the KPY Annual Conference by Professor Yudhishthir Raj Isar. In his talk, titled 'Autonomy of Culture: a new take on an old concept', Professor Isar looked at the concept of the autonomy of culture and how this concept changes in times of crisis and social turmoil. The Yearbook then follows on with the Dossier titled 'Cultural Change-makers', with commissioned articles and submissions and an interview with Doris Pack, Chairman of the European Parliament's Committee for Culture and Education. The 'Other Articles' section of the Yearbook contains a further two articles. In the 'Review' section, meanwhile, there are short review pieces on important events, programmes and publications of the 2012-2013 period pertaining to the topics of cultural policy and management. The Yearbook closes with the selection of the fifteen most important pieces of Turkish cultural policy and management news, covering the 2012-2013 period and chosen from the KPY's news database.
(Tanıtım Bülteninden)